Every galgo is special, but sometimes there is this one that you feel a special connection with. Its now over a year ago that I lifted Majestic into Charlottes' van, very carefully, not wanting him to damage his leg any further. He wasn't on our list, we were supposed to meet this hunter who was willing to give up two females, dogs he was proud of, but no use to him anymore. Majestic (nameless at that moment) was an extra, Charl had to work really hard on to persuade the hunter to give to her. For arrangements had already made, and as he said, we wouldn't want him, he was not a good dog. I will never forget the scene I saw that day, this scared male, with a badly broken leg, doing everything to stay out of the hands of his owner. To be honest, it was a miracle we spotted him at all. He tried so hard to be invisible. And the hunter did everything to try to convince us we didn't want him. But we did, and as I lifted his fle ridden, skinny, shaking body into the van, he put his head against my shoulder and relaxed, just for a few seconds. It was then that I vowed to find him a home if Charl would let me. We went straight to the vet with all three and it was then that we found out how bad his leg was, broken and so severely infected that an operation was out of order. I think it was on our way back to the vet that I asked Charl if she would trust me with him. We both knew it would be a long time before he was ready, if ever. Tomorrow Majestic will see his specialist for the last time before coming to the US on May 29. It was a really long way to recovery in which we sometimes wondered if his leg could be saved. It was a lot of hard work by Charl, a lot of care and vet visits. But Majestic will arrive, with 4 legs and a full year of love to get over his fears. He is living up to his name these days, he is Majestic, he's kind and fair.

If you can offer him his kingdom, let us know. Majestic is very social, loving and an awesome mouser. Leash walking is not an option, it is a must. A small yard would be wonderful, but not needed.

2016 Together we moved mountains!

Its been a whirlwind and we are not done yet!

2016 Together we moved mountains! 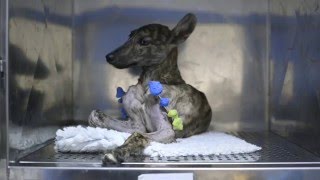 Life is never boring when...

How to find the available dogs

Getting ready for the first galgos of 2016 to come over.